“Now his elder son was in the field; and when he came and approached the house, he heard music and dancing. He called one of the slaves and asked what was going on. He replied, ‘Your brother has come, and your father has killed the fatted calf, because he has got him back safe and sound.’ Then he became angry and refused to go in. His father came out and began to plead with him. But he answered his father, ‘Listen! For all these years I have been working like a slave for you, and I have never disobeyed your command; yet you have never given me even a young goat so that I might celebrate with my friends. But when this son of yours came back, who has devoured your property with prostitutes, you killed the fatted calf for him!’ Then the father said to him, ‘Son, you are always with me, and all that is mine is yours. But we had to celebrate and rejoice, because this brother of yours was dead and has come to life; he was lost and has been found.’”

There are a lot of questions that we can ask about this parable, but perhaps the first and most pressing, is this: who is it about?

It becomes a story about how far a person can fall. In the case of the younger brother, the answer is pretty far– not only does he wish his father dead, but he breaks ALL the rules when he is out on his own. Notice that Scripture is circumspect on what exactly he has done, but suffice it to say, it was “dissolute.” He runs hard to the bottom of the barrel, and he stays there, even after squandering all that he has, wallowing in self-pity and beyond the grace of God.

Even his road to redemption is questionable—scripture says “he came to himself” one day, and realized that he would get better treatment as a hired hand for his father than his current living conditions allowed. And it’s difficult to tell whether his “turning” is heart-felt our not—he rehearses his lines to the point that it is difficult to tell whether he means them or not. Like Rubio, he repeats the same lines over and again.

But he is also harsh, even unwilling to embrace his broken brother on the way home. Notice, the older brother doesn’t have a problem with his brother coming home—he simply objects to the party. He objects to the embrace of the wayward son.

“Sure, let him come back,” the older brother seems to snarl. “Just make sure he does it on his knees. Make him beg for it. Make him pay for his mistake. Don’t ever let him forget that he is the one who screwed up.”

If this a story about the older brother, it becomes a story then about the limits of fairness—you can do all the right things for all the right reasons, and you might still live your life watching someone else get all the attention. You might find yourself bitter, and frustrated, sitting in the dark beyond the disgrace of the party. You might find yourself stewing over the fact that forgiveness just isn’t fair enough for you.

But is there another way to read this story?

Perhaps we should look at the text itself. Jesus said, “There once was a father who had two sons.” Ahh!!! Perhaps this is a story about a father! 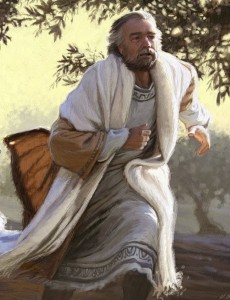 And if this is a story about a father, what do we learn that is different?

We learn a lesson about what lavish, profligate, limitless, offensive grace looks like. We learn about a father who does not keep score—he doesn’t ask what the son did on the way out the door. He doesn’t have conditions on the threshold. He simply embraces. Fully. And not just embraces, but celebrates. Even a scoundrel son.

Recall that it is that celebration that offends the older brother. But how then is this father disposed to his dutiful son, who never left, who never denied, who always did as he was told? He is lavish with his compassion. He does not deny the older son’s struggle. He does not tell him he is wrong. He simply reminds him: we have to celebrate, because something lost has been found. Someone dead is alive.

It is easy to forget this when we feel as though we are being passed by. Easy to start keeping track, to start ranking folks—who deserves what they have, and who does not? Who worked for it, and who is coasting on the hard work of someone else? Especially when we feel like the older brother.

We who sit in this church are likely to relate to someone in this story—but the truth is that each of us have both brothers within us. For there have been times where we were dutiful, righteous, and did the right thing. And there are times where we have felt beyond grace. There are times when we have fallen so far afield that we wonder whether anyone would care what happened to us.

Too often we allow people to starve out there in the cold. Or worse, we leave ourselves out there alone, because we feel ourselves unworthy. We cannot imagine that anyone is watching the road for the slightest sign of our return. We cannot smell the fatted calf roasting on the pit. But each of us have received lavish, undeserved grace. Each of us have been embraced by someone, at some point in our lives, when we felt we did not deserve it. When we feared we were beyond reaching.

Our call, therefore, is to embrace one another. In this church. At this table. In our walk with Christ—we are called to embrace, and to be embraced. To love, and to be loved. To forgive, and to allow ourselves to be forgiven.

To remember, that the God who claims, the God who sent his Son to dwell amongst us, loves us and forgives us not after determining whether it is fair or just, but because God yearns for us to be in communion with one another.