Then he said to them, “These are my words that I spoke to you while I was still with you — that everything written about me in the law of Moses, the prophets, and the psalms must be fulfilled.” Then he opened their minds to understand the scriptures, and he said to them, “Thus it is written, that the Messiah is to suffer and to rise from the dead on the third day, and that repentance and forgiveness of sins is to be proclaimed in his name to all nations, beginning from Jerusalem. You are witnesses of these things. And see, I am sending upon you what my Father promised; so stay here in the city until you have been clothed with power from on high.”

Then he led them out as far as Bethany, and, lifting up his hands, he blessed them. While he was blessing them, he withdrew from them and was carried up into heaven. And they worshiped him, and returned to Jerusalem with great joy; and they were continually in the temple blessing God.

In the first book, Theophilus, I wrote about all that Jesus did and taught from the beginning until the day when he was taken up to heaven, after giving instructions through the Holy Spirit to the apostles whom he had chosen. After his suffering he presented himself alive to them by many convincing proofs, appearing to them during forty days and speaking about the kingdom of God. While staying with them, he ordered them not to leave Jerusalem, but to wait there for the promise of the Father. “This,” he said, “is what you have heard from me; for John baptized with water, but you will be baptized with the Holy Spirit not many days from now.”

So when they had come together, they asked him, “Lord, is this the time when you will restore the kingdom to Israel?” He replied, “It is not for you to know the times or periods that the Father has set by his own authority. But you will receive power when the Holy Spirit has come upon you; and you will be my witnesses in Jerusalem, in all Judea and Samaria, and to the ends of the earth.” When he had said this, as they were watching, he was lifted up, and a cloud took him out of their sight. While he was going and they were gazing up toward heaven, suddenly two men in white robes stood by them. They said, “Men of Galilee, why do you stand looking up toward heaven? This Jesus, who has been taken up from you into heaven, will come in the same way as you saw him go into heaven.”

Forty days after Easter, and always on a Thursday, the universal, catholic church pauses to celebrate one of the five great feasts, or holidays, that mark the life of Jesus.   Ascension joins the celebrations of Jesus’ baptism, transfiguration, passion, and resurrection as one of the moments in which the church has traditionally been unified in its witness to the mystery of the Incarnation.

In the Eastern Church, where prayer has been linked to icons for centuries, the Ascension is most often portrayed in the following way: Jesus, thronged by angels, levitates in the air.  Below him, the disciples gape towards heaven, their postures belying their sense of confusion and awe.  Two angelic messengers stand in their midst, telling them to go ahead to Galilee.  And in the center, her arms raised towards heaven, her gaze directed at the viewer, bearing witness to this holy moment of separation, is the Mother Mary.

The Gospel account doesn’t mention Mary’s presence at the Ascension, but I think it is telling that the Orthodox tradition has placed her at the center of Jesus’ departure.  Like any mother, she is has been there for the important moments in the life of her child—she kept watch over Jesus with the women as he embraced his calling in life, traveling the countryside with a message of repentance and new life.  She did not hide when he was arrested, and she wept on the hillside as he drew his last breath.  Wherever Jesus was, his mother was never far behind.  And so it stands to reason that the Holy Mother would be there for the moment when Christ truly does say goodbye to those he loved as his own.

How fitting, that today, as millions of Americans shower their mothers and mother-figures with french toast, flower arrangements, and symbols of appreciation, that we have this opportunity to remember the Mother whose hands released the Prince of Peace into the heavens.

Mother’s day, as you may be aware, had, like Jesus, its own radical beginnings.  In the 19th Century, women’s movements in the United States had been trying to establish different activities and holidays in favor of peace against war.  In particular, American mothers wanted to ensure that the devastation that the Civil War and other conflicts had visited upon families would not be forgotten.  By working for peace, they hoped to create a world in which war was a memory. As Julia Ward Howe’s proclaimed in her “Mothers Day Proclamation”:

We, women of one country, will be too tender of those of another country, to allow our sons to be trained to injure theirs. From the bosom of the devastated earth a voice goes up with our own. It says: Disarm, disarm! The sword of murder is not the balance of justice. Blood does not wipe out dishonor, nor violence vindicate possession. As men have often forsaken the plough and the anvil at the summons of war, let women now leave all that may be left of home for a great and earnest day of council.

Perhaps it is no surprise that this holiday was swiftly domesticated by the Hallmark industry.  Far easier to hug your mother and go to brunch than to agitate for peace. 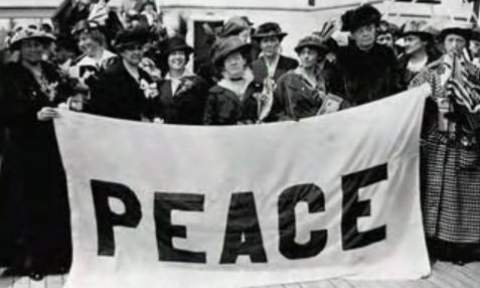 And yet, that is precisely what Jesus’ life, and this moment of ascension affirms.  For as he ascends into heaven, Jesus reminds his disciples: “YOU will receive power when the HS comes upon you; and YOU will be my witnesses to the ends of the earth.”  Jesus, with Mary, and Julia Ward Howe and Anna Jarvis and mothers everywhere, looks us straight in the eye and says: the Kingdom is in your hands.

How many of us have found ourselves in that moment where the training wheels truly have been taken off, and we are on our own?  When it is up to us to decide—will we soar with the eagles, or will we stay grounded?  Will we trust Jesus when he tells us that we can, with God’s help, follow in the Jesus way?  Or will we find excuses to stay silent, to stay home, and thereby clip our own wings

No parent, not even Mary, desires this for their child.  We want our children to soar.  We want them to embrace the destiny that God has for them.  And yet, we also fear what will happen if their wings fail, and the fall to the ground.  Or, that they may fly so far from us that we may never see them again.

This moment was clearest for me on the day that I left for college.  At nearly 19, I considered myself incredibly mature.  I was ready to embrace the future.  And so my parents climbed into my dad’s truck, loaded up with boxes of my most cherished possessions, and we started down the I-5 freeway towards the celestial palace that would be my academic home.  Five hours later, we laughed as we labored to cram those boxes into my tiny dorm room at the University of Southern Cal.  We walked through the campus, bought a sweatshirt, ate a meal together.  And then, it was time to say goodbye.  I will never forget how it felt to walk with my family to their car, and to know that I would not be going home with them.  I will never forget how my mother embraced me and then turned away quickly so that I wouldn’t see her tears.  How my father awkwardly shook my hand (something we never did!) so that he could slip me a hundred dollars, and how his eyes shone with tears as he waved goodbye.

As Christians, let us not forget that this is also what is at stake in Ascension.  That the God who dwelled with us embraces us even as he departs from our sight, not as a punishment, not because he doesn’t love us, but because this next part we can only do on our own.  It is time for us to discover what it means to be Christ’s disciples for ourselves.  It is time to embrace the Kingdom on the power of our own abilities and gifts.  It is time to honor the witness of the Prince of Peace by being like him.

A frightening moment, indeed, but here we are.  Full of the hope and promise of the Kingdom of God.  May we raise our hands with Mary, and may we walk into the future with the confidence of the children of God.